Diary of a Wimpy Kid was named Best Book of the Last Ten Years at the 2012 Blue Peter Book Awards. 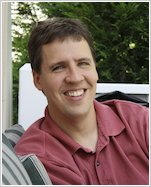 Describe Diary of a Wimpy Kid

Diary of a Wimpy Kid is the fulfilment of a life-long dream. I had always wanted to be a cartoonist, but I found that it was very tough to break into the world of newspaper syndication. So I started playing with a style that mixed cartoons and “traditional” writing, and that’s how Diary of a Wimpy Kid was born. The book centres around a middle-school student named Greg Heffley who thinks very highly of himself, but is oblivious to his own imperfections.

What is your favourite family story?

When I was eight or nine, my older brother, Scott, played a practical joke on me. On the first night of summer vacation, Scott woke me up in the middle of the night. He was dressed in his school clothes and was wearing his backpack. He told me that I had slept through the whole summer, and I had even missed our family’s trip to Disney World. Then, he told me that luckily, I had woken up in time for the first day of school. So I got dressed for school, went downstairs, and made myself breakfast. I don’t know how long it took me to figure out it was 2:00 in the morning. I’ve got this story in my book.

If you could choose any story to live in, which story would it be? Why?

That would have to be either The Lion, the Witch, and the Wardrobe or Jurassic Park, and both for similar reasons. The Lion, the Witch, and the Wardrobe teased me into thinking there might be a magical world right in the back of my closet. And Jurassic Park teased me into thinking I might actually get to see a dinosaur one day. I’ve always felt disappointed that I couldn’t experience what those two books’ writers seemed to be promising was possible, so I’d love to be able to see those things with my own eyes.

Describe your most memorable teacher.

My most memorable teacher was named Mrs. Norton. She was quite a bit older than the other teachers in my elementary school, and not, from outward appearances, the type of person you’d expect might place a high value on humour. But Mrs. Norton encouraged her fifth-graders to try to be funny. There was one kid named James who stayed quiet the whole school year, and on the last day of class, Mrs. Norton invited James to do anything he wanted for five minutes. Without hesitation, James jumped up on a desk and did a spot-on impersonation of Charlie Chaplin, including a soft-shoe routine. Mrs. Norton could always bring out the best in kids, and she brought me out of my shell, too.

What was your favourite story as a child?

Why do you write books for kids?

I write for kids because I think the most interesting (and most humorous) stories come from people’s childhoods. When I was writing Diary of a Wimpy Kid, I had a blast talking on the phone to my younger brother, Patrick, remembering all of the things that happened to our family when we were growing up. I think if everyone would write down the funny stories from their own childhoods, the world would be a better place.

What is your idea of bliss?

Taking my kids to a new place…Disney World, New York City, even a local carnival…and seeing the wonder on their faces at experiencing something great for the first time.

What’s your favourite thing about being a writer?

I love the fact that now that the book is in print, it’s finding its way into the nooks and crannies of people’s houses. When I started writing Diary of a Wimpy Kid, I was trying to write the type of book you might enjoy, put back on your shelf, and rediscover a few years later. I hope that the book finds its way into the bathroom of every kid in America. :-)

How do you come up with the names for your characters?

I usually pick by the sound of it. Rowley is not really a regular kid’s name; it is a town in Massachusetts.

Is Greg a good role model?

No. In fact, you should do the opposite of everything Greg does.