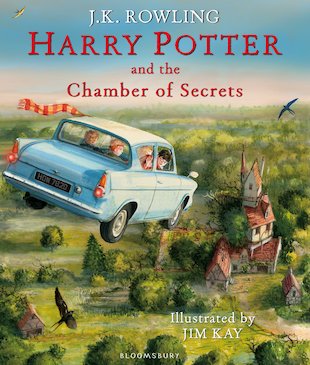 Harry Potter and the Chamber of Secrets (Illustrated Edition)

The second awe-inspiring fusion of magic and glorious artwork from spellbinding author J.K. and genius artist Jim Kay! The next best thing to finding out you’re a mega famous kid wizard. When Harry Potter returns for his second term at Hogwarts, he doesn’t take the Hogwarts Express. He’s found an even better way to get to class: a flying car! (Forbidden but seriously cool.) And the wild ride continues in a topsy-turvy year of magic, danger and breaking all the rules – brought to life in Jim Kay’s breathtaking pictures. Step inside Harry’s wizarding world.