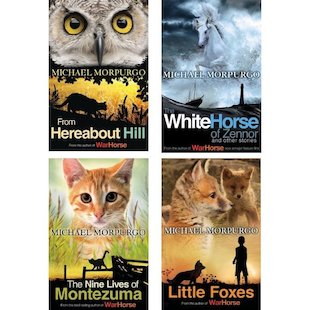 A feast of stories from a king of writers. Fabulous tales of animals and legends, told in magical style. There’s The White Horse of Zennor, where myths from the Cornish coast sweep in from the sea, and an eerie white horse thunders over the moor by moonlight. There’s Little Foxes, in which a troubled boy fights to save the foxes he loves. In On Hereabout Hill, gritty tales of war rub shoulders with ghosts and magic. Then, last but not least, Montezuma the cat tells his tale. He’s named for an Aztec king, and he’s a legend of the farmyard!