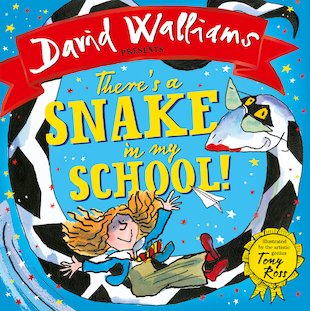 There's a Snake in My School!

A sssuper-silly picture book by the reigning king of comedy. Warning: if you’re ssscared of sssnakes, keep clear! It’s Bring Your Pet to School Day. Cute dogs, snuggly kittens and twitchy-nosed guinea pigs. Aww: so cuddly! But Miranda loves to be different, and so she’s brought – AAARGH! Get that snake out of here!!!! Miss Bloat the headmistress says snakes shouldn’t be allowed in school. But Miranda thinks different. Can she prove that snakes makes ssssuper pets? And have YOU ssspotted a ssssnake nearby?