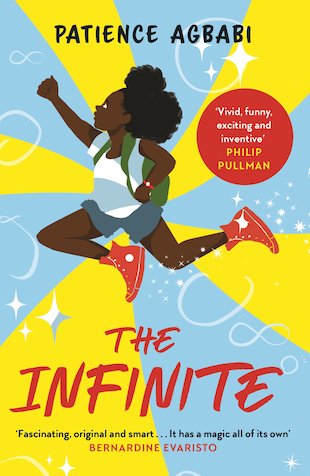 The Leap Cycle #1: The Infinite

Totally addictive! Born on 29 February, Elle is a Leapling – born to hop time and fight crime! People born on the 29th of February, Leaplings, are very rare. But rarer still are Leaplings with The Gift. Elle Bíbi-Imbelé Ifíè has The Gift – the ability to leap through time. But she’s never used it. Until now. On her twelfth birthday, Elle and her friend Big Ben travel to the Time Squad Centre in 2048. They are called there by a sinister warning from the future: other Leaplings are vanishing in time. But Elle’s adventure is more than a race through time. It’s a race against time. She must save the world as she knows it – before it ceases to exist…

“Vivid, funny, exciting and inventive… Patience Agbabi has created something fresh and original here, and I look forward very much to what she writes next.” Philip Pullman

“A fascinating, original and smart adventure tale with a rhythmic prose style that leaps off the page into scintillating life. It has a magic all of its own.” Bernadine Evaristo

“So adventurous that it lit up parts of my brain I didn’t know I had. Patience Agbabi has caused a wonderful supernova deep in the literary universe.” Benjamin Zephaniah