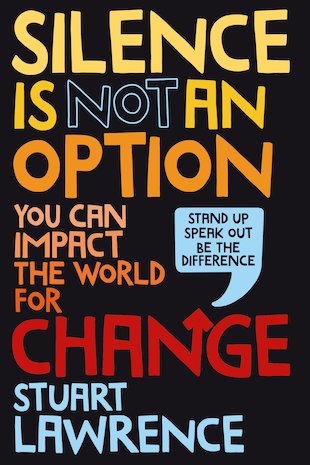 Silence is Not An Option: You can impact the world for change

Silence is NEVER an option – stand up, speak out, be the difference. In this book, Stuart Lawrence talks about what he has learned from life – the tools that have helped him live positively and kept him moving forwards when times have been tough. “We all want to be successful in life and to be remembered for our achievements – but how can we do that, when the world can seem so big and sometimes scary?” – Stuart Lawrence “The publication of his first book for children, Silence is Not an Option: You can Impact the World for Change, is intended to empower all children irrespective of skin colour to demand a better society… Stephen Lawrence’s brightness runs throughout the pages, along with Stuart’s love for his brother” – Louise Carpenter. The Times Magazine From role models to self-control, failure to imagination, Stuart’s aim with this book is to use his own experience to help young people – to help all people – harness the good in themselves and in the world around them, using that fire of positivity to create change in their lives.

About the author: Stuart Lawrence is the younger brother of Stephen Lawrence, the young man who, on 22 April 1993, at the age of just 18, was murdered in an unprovoked racist attack. Stuart is an educator and motivational speaker, dedicated to helping to transform the life chances of young people.