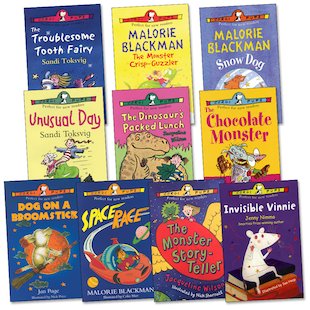 Ten tempting tales stuffed with vivid characters that will keep young readers quiet all day long! With nothing but brilliant stories created by top authors, they’re perfect for building up an appetite for books. Rapidly building up confidence and fluency, these stories will delight developing readers moving up from picture books. And with a monster storyteller, a chocolate monster and a dinosaur’s packed lunch to munch on, it’ll be ages before children have had their fill of these!