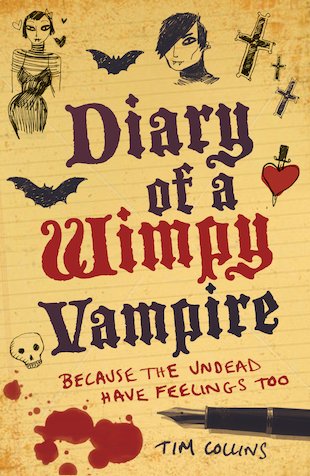 Diary of a Wimpy Vampire

Adrian Mole meets Twilight in the hysterical diary of unlucky Nigel Mullet! Like Edward Cullen in Twilight, Nigel was transformed into a vampire as a teenager, and will remain this age forever. Unfortunately, Nigel became a vampire at the awkward age of fifteen, and must now spend eternity coping with acne, a breaking voice, and total ineptitude with girls… In his excruciatingly funny diary, Nigel chronicles his increasingly desperate attempts to be noticed by the love of his life, Della Sparrow; the constant mortification caused by his vampire parents; and the frustration one feels when you’ve got the whole of boring eternity stretching out in front of you. Being a wimpy kid is bad enough when you’re normal. But it’s so much worse when you’re a vampire!