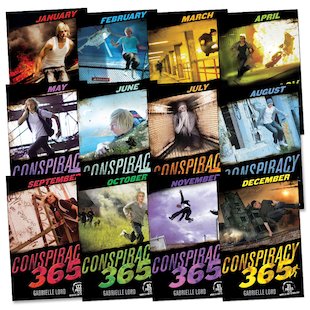 On New Year’s Eve, Cal is chased down the street by a crazed man with a deadly warning: “They killed your father. They’ll kill you. You must survive the next 365 days!” Forced to run, Cal finds himself hunted by ruthless criminals as well as the police. Somehow he must uncover the truth about his father’s mysterious death, and solve the Ormond Singularity, a shocking riddle from the past. But who can he turn to when the whole world wants him dead? The clock is ticking. Any second could be his last. He has 365 days, and the countdown has begun…

Follow Cal through twelve nightmarish months, from the beginning of his mission to its bitter climax, in the full set of books from this adrenaline-soaked series!