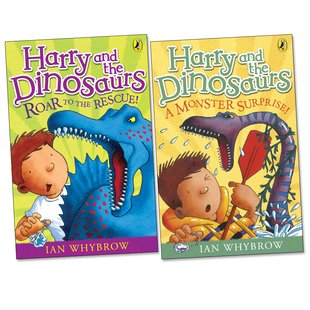 Harry and the Dinosaurs Fiction Pair

Two brilliant longer novels from the best-loved series by Ian Whybrow. Harry thinks he’s too old for his bucketful of dinosaurs – but they have other ideas! He looked after them when he was little, and now they’re determined to stick by him… for life. And Harry isn’t the only one who’s got a lot bigger! Join this plucky kid and his army of dinosaur muscle as they step in to help their neighbours out: taking on the crooks who want to rob old Mr Oakley, and giving some wildlife thieves a MONSTER surprise.