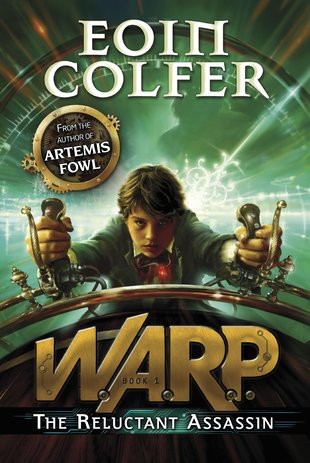 In Victorian London, teenage orphan Riley is apprenticed to corrupt illusionist Albert Garrick, who has begun to use his conjuring skills for evil. Able to gain access to his victims’ homes by using his dubious talents, Garrick tries to force his reluctant apprentice to commit his first murder. Luckily for Riley, his intended victim is a scientist from the future, who pulls him through a wormhole into modern-day London. It would be the perfect escape – except that Garrick has followed behind! Unfortunately, the journey through the wormhole has given the demonic Garrick all of the scientist’s powers. Now Riley must ensure he never gets hold of the timekey that will return him to the past. Because if Garrick ever returns to Victorian London, he will quite literally change the world for his own evil ends…

The knuckle-whitening new blockbuster from Eoin Colfer is a sizzling steampunk adventure with a time-travelling twist!

“Colfer has the ability to make you laugh twice over: first in sheer subversive joy at the inventiveness of the writing, and again at the energy of the humour.” Sunday Times

“Readers mourning the end of the Artemis Fowl series can take heart: this first book in the time-bending WARP series is an all-out blast.” Publishers Weekly