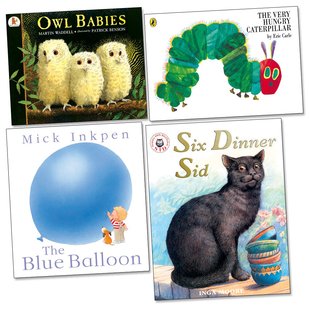 This set of timeless favourites features a whole menagerie of animal friends, brought to life by award-winning authors Mick Inkpen, Eric Carle, Inga Moore and Martin Waddell. In The Blue Balloon, Kipper the dog finds a balloon at the bottom of the garden. But this is no ordinary balloon – it’s full of fun and magic! Meanwhile, a little caterpillar has a very big appetite in Eric Carle’s The Very Hungry Caterpillar, while Six Dinner Sid introduces a charming yet greedy cat who has six owners wrapped around his little paw – or so he thinks. Finally, Martin Waddell’s enduring bestseller Owl Babies completes this classic collection, which is definitely not to be missed!