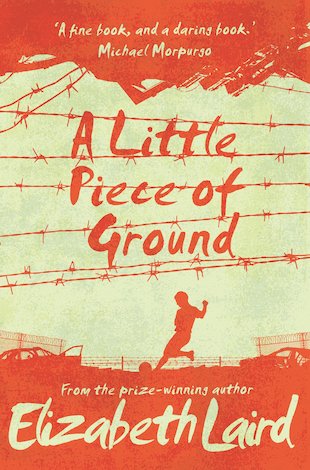 A Little Piece of Ground

It’s just a patch of ground: a place to hang out, kick a ball. But in Palestine, there’s no such thing as safe ground… Karim and his family live in Ramallah, which is controlled by Israeli armed forces. They’re trapped in their home by a strict curfew, as Israeli tanks patrol the streets. Karim longs to be outside playing football. Being stuck inside is driving him mad! When the curfew ends, he and his friend find a patch of waste ground. It’s the perfect site for a football pitch. Even better, an old car hidden under bulldozed buildings makes a brilliant den. But in Ramallah, soldiers shoot first and ask questions later. So when Israeli troops catch Karim outside during the next curfew, how will he survive?

“A fine book, and a daring book.” Michael Morpurgo

“A brave, serious and successful attempt to reach out and have this story heard.” Michael Rosen