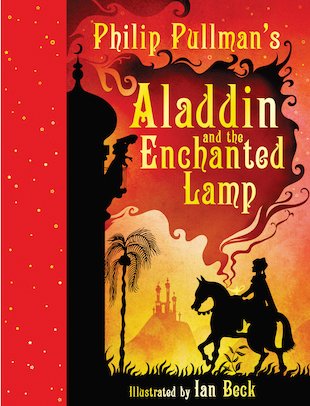 Aladdin and the Enchanted Lamp

A glory of a fairy tale by the Northern Lights genius. The stunning art flickers like flames. If you’ve read books like The Firework-Maker’s Daughter, you know that Philip Pullman can hardly write a word without casting a spell. He is a master of fantasy, a weaver of fairytale worlds. One word and you are enchanted. Now he bewitches you afresh in this new version of Aladdin. After all, who better to retell this tale of genies, wishes and mischief? Artist Ian Beck adds his own magic to the mix in mysterious silhouette pictures, like shadow puppets seen by candlelight. Rich, dark and hypnotic.