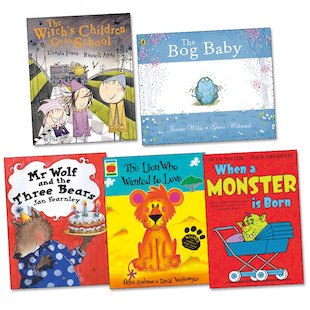 Marvellous award-winning treats from the very best contemporary children’s writers. Build your home library with the crème de la crème! This vibrant selection highlights award-winners which have swept the boards in recent years, from the touching tale of the adorable Bog Baby to a hysterical winner of the Roald Dahl Funny Prize – The Witch’s Children Go to School! You’ll meet a real little monster, a wolf with a unique approach to life, and a shaggy little lion who’s a big softie at heart! With dynamic illustrations and a fresh contemporary feel, these clever, witty books will delight you – just like they did the prize judges!