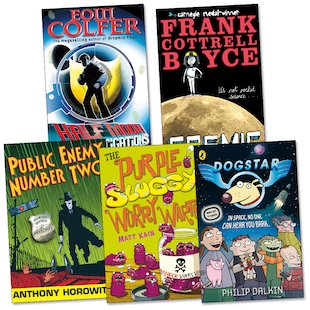 Explosive adventures to take you out of your comfort zone – and into deadly danger facing ruthless enemies! Sleuths and sci-fi, terror and laughter: get your fill in here! Travel to the final frontier with Liam, who finds himself stuck on the moon, making a giant leap for boy-kind. Find out what happens when Jez and Charlie buy some magical hairy warts which are meant to suck people’s worries away! Track down a missing space-ark full of lost dogs, crack a dangerous case with pint-sized private eye Fletcher Moon, and find out why bungling sleuths The Diamond Brothers are public enemies number two!