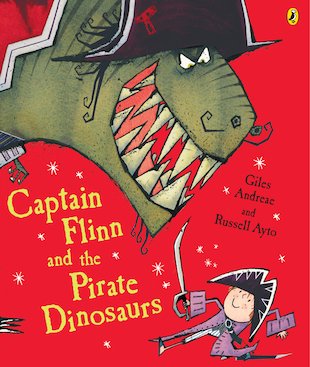 Captain Flinn and the Pirate Dinosaurs

Adventure beckons when Flinn looks into the art cupboard in search of some colouring pens – and discovers Captain Stubble, a real-life pirate captain! Soon Flinn and his friends are sailing off on the High Seas into a magical world of pirates who are also bloodthirsty dinosaurs! With treason on the high seas, a pirate ship to sail and a treasure-trove of comical scares to enjoy, this fantasy adventure is an absolute gem of a book to hold every imagination captive. Learn the names of all the pirate dinosaurs, and sing along to their scary song!