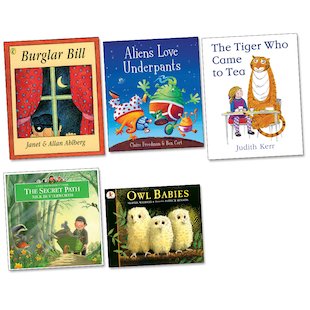 Meet classic characters both old and new in a set of true essentials that no parent or child can resist. Explore the world of books in the company of some truly timeless friends! Join Sophie and her very surprising teatime guest, who is furry and orange and stripy. Chuckle at some very cheeky aliens who have their eye on your underwear drawer! Wander through a garden maze with Percy the Park Keeper, or snuggle up in the dark night with the adorable Owl Babies. And last but not least, find out why crime doesn’t pay with the swarthy, super-naughty Burglar Bill!