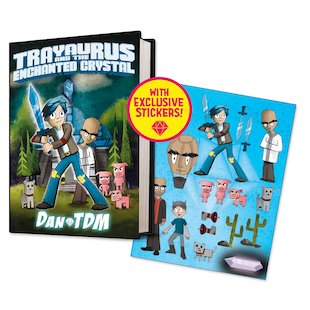 Dan TDM: Trayaurus and the Enchanted Crystal (With Stickers)

Now with exclusive stickers! Talking pigs, magic crystals and clone armies: who says gamers have all the fun? Imagine if Minecraft buddies DanTDM and Tray came alive in a book. Well, they have! This is that book, and they’re inside it. But they’re not just sitting pretty, or taking a nap. They’re saving the world – fingers crossed. When a strange crystal plummets to earth, it breaks into five pieces, each super-charged with crazy power. One piece is eaten by pigs, and now they can talk. Dan and Trayaurus find another one. Problem is, evil Denton has also found a shard, and he’s not playing nice…