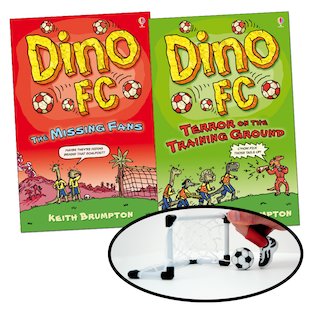 They’re the craziest team in the Jurassic world – but they’re in danger of extinction! Can Dino FC fight back and save the day? Terry Triceratops is the manager of Dino FC, and he’s a dead dinosaur walking. The team’s bottom of the Premiership, and their chances are vanishing every day. Can he think up a way to whip the players into shape, so they’ll truly be a match for the opposition? And how will the dim dino players attract the fans they need, before support dies out altogether? A wild and witty new series where the buzz and action of the Premiership collides with cool characters from the Prehistoric age!