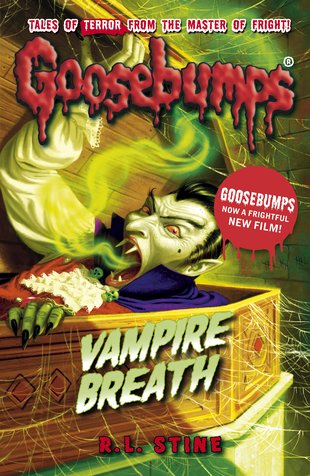 THE classic horror series. So scary libraries ban it. So cool it’s sold 350 million copies. Nasty like fingernails scratching on glass. Prepare to gnaw your knuckles. Tough. That’s Freddy Martinez and his friend Cara. They’re not afraid of anything. But that was before they went exploring in Freddy’s basement. Before they found the secret room – and the bottle of Vampire Breath. Poor Freddy and Cara. They should have never opened that bottle. Because now there’s a vampire in Freddy’s basement. What’s he going to drink?