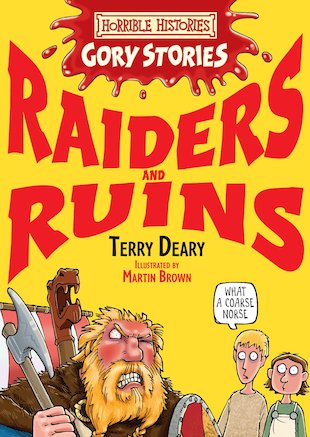 Another horribly hilarious Gory Story from the fearless creators of Horrible Histories! Eric is a young novice monk in the abbey at Lindisfarne. But when he faces a lashing from fearsome Father Patrick, he decides to run away! Fleeing in a small boat on the treacherous seas, Eric rides into a storm – and is captured by ruthless Norsemen! Together with Hilda, a a young English slave girl, Eric plans their escape. But when the pair uncover a secret plan to raid English monasteries, they find themselves part of the raiding party attacking Lindisfarne itself! Can they save Eric’s beloved monastery, its treasures and inhabitants?