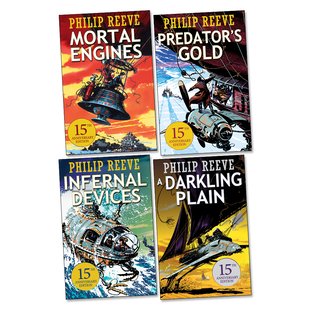 Fancy seeing the world? In Philip Reeve’s dystopian future, cities roam the world on wheels. And they’re hungry! London is a beast on wheels: a future city like you’ve never known before. After the apocalyptic Sixty Minute War, the world’s surviving cities turned predator – chasing and feeding on smaller towns. Now London is hunting. But something deadly is hiding on board. Oh – and we don’t mean the scarred angry girl with the knife… A blasted future. Moving cities. Stalking robotic hunters. A secret weapon that could blow the world apart (again). Want to see it all? Hitch a ride on London. Just mind the cyborg assassins. And don’t fall overboard.