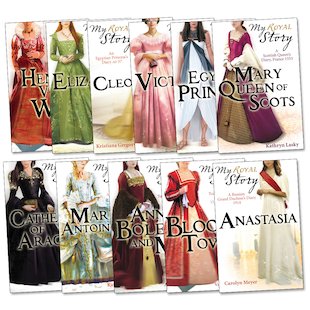 Stories from the past – told by true princesses! From Tudor England to the Russian Revolution, will life in the royal courts be a fairy tale come true? These fictional diaries take you into the hidden lives of real royal-born girls from across the globe and ages. In Ancient Egypt, feisty Cleopatra fights to establish herself in a male-dominated world, while in eighteenth-century France, a young Marie Antoinette has a recurring nightmare about the broken head of her porcelain doll. In Britain we meet Victoria, a lonely girl hidden from the world that she will one day govern, as well as Elizabeth, the future Tudor queen who will lead England into a golden age. And in Russia, Anastasia has grown up to rule the royal court – but a rebellion which will shatter all she loves is about to erupt.

Told in engaging and believable voices, these vivid diaries explore the details of the lives these girls really lived, with all their thrilling ups – and deadly downs.