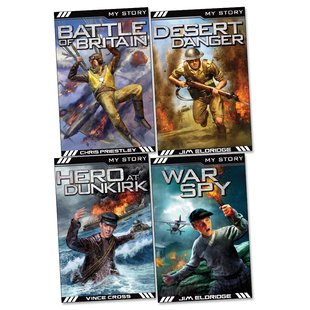 Seriously addictive war stories from a series that’s sold over a million copies! Enter the maelstrom of battle in WWI and WWII – tasting fierce fighting on the frontline, at sea and in the skies.

Battle of Britain is the story of Harry Wood, a daring RAF pilot determined to shoot down the Luftwaffe in 1939. Will he succeed? In Desert Danger, mine expert Tim Jackson fights to keep his nerve as British forces advance on El Alamein. In D-Day, Lieutenant Andy Pope takes part in fierce fighting during the Normandy landings of 1944. Finally, The Trenches is the story of Billy Stevens, a telegraph officer stationed near Ypres during the Great War. As the deadly Big Push begins, Billy realises that British bullets aren’t just aimed at the enemy…