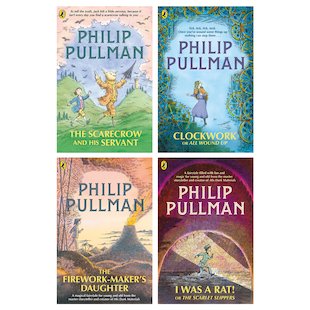 So: what does Philip Pullman do when he’s not penning epics like Northern Lights, or signing copies of The Book of Dust, or being interviewed for the papers? The answer is, he writes rather wonderful fairy tales – and this pack is your chance to discover them. There’s a hapless rat who turns into a little boy. A clockmaker with a sinister secret. A scarecrow on a mission. A brave girl’s battle with the evil Fire-Fiend. As in Clockwork, each book’s simplicity and charm masks the complexity that weaves many magical elements into a single glittering whole.