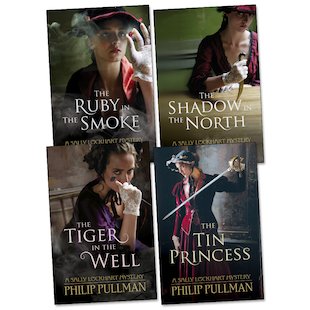 As seen on TV starring Billie Piper! Four dazzling Victorian thrillers by the author of Northern Lights. Philip Pullman brings you a plucky heroine to rival his Lyra Silvertongue. Dare you miss out?

Beautiful young sleuth Sally Lockhart rides like a Cossack and shoots like a demon. And like any proper heroine, she has deadly foes to face! From Indian palaces to Chinese opium dens; from machines designed to kill to rubies cursed with human blood. Will Sally solve the deadly puzzles that surround her? And will she ever hunt her father’s killer down? If you love Philip Pullman, steampunk or detective fiction, every page will deliver a new thrill!