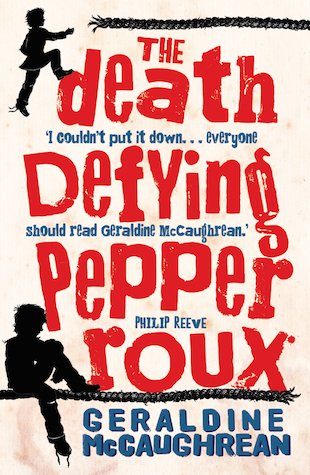 On the morning of his fourteenth birthday, Pepper had been awake for fully two minutes before realizing it was the day he must die. This had to be the day everyone had been waiting for – and he was terrified he would disappoint them, make a poor showing, let people down.

Pepper Roux has his whole life in front of him. If he’s lucky, that’s fourteen hours by the hall clock. When he was born, his aunt foretold that he would not live past fourteen years of age – and now his time is up. But Pepper isn’t ready to die. So he runs away, setting sail on a sea of adventures, inviting disaster and mayhem at every turn! Despite the trail of chaos behind him, can he outrun his fate and stay one step ahead of death – if only for a while? From the brilliant imagination of Geraldine McCaughrean, this riotous adventure stars an unforgettable character who will stay with you long after his story is told.

“I couldn’t put it down. It’s wise and odd and funny… everybody should read Geraldine McCaughrean.” Philip Reeve, author of “Mortal Engines”

“The story travels like a brilliantly skimmed stone, spinning through the air, kissing the water before spinning off again.” Frank Cottrell Boyce, author of “Millions”