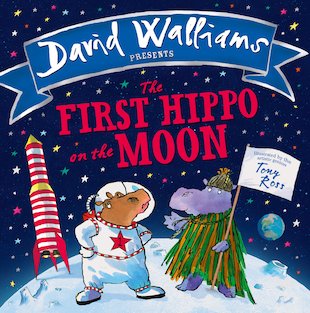 The First Hippo on the Moon

Huge. Grey. Round. With a pitted surface. No, that’s not the moon. It’s a hippo in orbit! Two hippos both want to be first to the moon. Sheila is straight from the swamp: backed by good friends, a home-made rocket and lots of pluck. But her rival, Hercules Waldorf-Franklin III, has tons of dosh and a super-snazzy shuttle. Take a guess: who will win this space race? A book with everything: brilliant pictures, a crazy story, rockets, hippos and (best of all) a touching message. Dare to dream big!