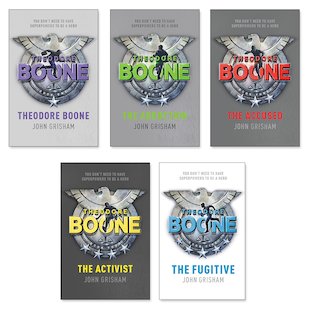 Half the man. Twice the lawyer. Theo won’t stop until justice is served. Cracking legal thrillers by John Grisham, the legendary master of the genre. Theodore Boone has spent more time in the courtroom than pretty much anywhere else – and not because he’s in trouble. He might only be thirteen, but he knows everything and more about criminal law. But when does knowing a lot turn into knowing too much? When Theo wraps up a notorious local murder, his dream of becoming a lawyer suddenly comes true. But every case drags him into deadly danger. Theo has only one weapon to fight with: the truth.

“Not since Nancy Drew has a nosy, crime-obsessed kid been so hard to resist.” New York Times