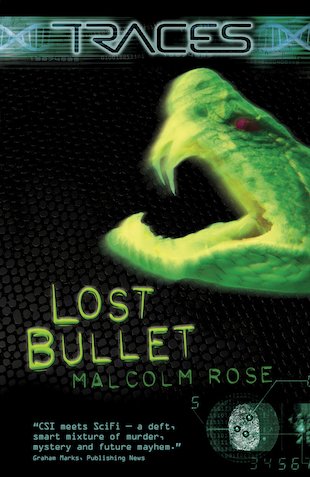 In the slums of London, Luke and Malc investigate a doctor’s murder. They find a bullet wound to her head, but rain has washed away the bullet – and all other clues. As more innocent victims die, pressure builds on Luke and Malc to find the culprit before the bizarre shooting spree becomes an all-out massacre. Imagine a place where technology rules…where London is a slum and the North is a cultural capital…where from the age of five, the authorities decide your future. In this fascinating parallel world, quick-thinking Luke Harding is the youngest Forensic Investigator ever, aged just 16. Luke and his right-hand robot, Malc, make a top team. Together, they have the talent to crack any crime – and a good joke, too. Doctor Anna Suleman is ruthlessly shot dead leaving work one evening. Luke and Malc are put on the case by The Authorities. Luke discovers Owen Goode was shot at too, nearby, at a similar time. Teenage runaway Goode shows Luke the pamphlet that fell from the high-rise window of the person who shot at him. It gives details of a religious cult called the Visionaries. The cult disapproves of doctors and pairing committees as they believe they interfere with god’s chosen path for humans. Luke suspects the unhinged Ethan Roach, leader of the Visionaries, who uses snakes for Luke’s scary initiation ceremony into the cult. Luke’s other suspects include Dr Coppard who is Anna’s partner (she had been having an affair) and Alex Foxton, Anna’s boss, was against her illicit work with conjoined twins. Then another doctor and a pairing committee are murdered. Luke feels he has many leads but is getting nowhere. Out of the blue Luke and Malc suffer a violent attack in a lift shaft. Malc is obliterated but with painstaking work is rebuilt. He just managed to catch a picture of the killer – Reece Morgan, receptionist at Luke’s hotel and covert Visionaries member. He had attended services in disguise so Luke never recognised him. Despite Luke and Malc thinking they were getting nowhere it was their actual extreme proximity that made Morgan attack Luke and Malc and thus reveal himself. The case is solved.