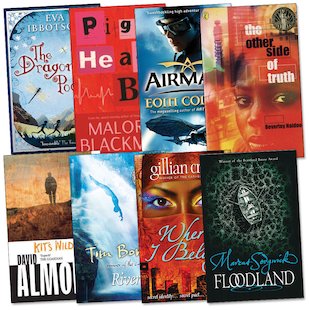 Spellbinding fiction and stonking adventures to captivate you and make you howl for more, created by the very best writers in existence! Representing some of the very best children’s fiction of recent years, this is the pack for all you bookworms out there. It’s bursting with must-read tales that grab you in and refuse to let go; ones you just won’t be able to tear yourself away from. The plight of two child refugees racing towards safety. Spy adventure with Alex Rider, deep in the Triad ganglands. A fantasy quest in a drowned future ravaged by ruthless pirates. An imprisoned boy desperate to find the secret of flight. From authors like Eva Ibbotson, Anthony Horowitz, Eoin Colfer and David Almond, these will take you on amazing journeys of all kinds. So if you want to go places, get stuck in!