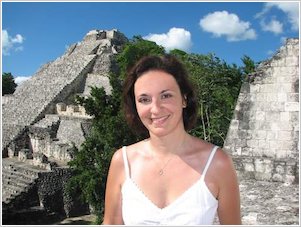 M.G. Harris (M.G. stands for Maria Guadalupe) was born in Mexico City. When her parents split up, five year-old M.G. moved to Frankfurt, Germany, with her air stewardess mother and younger sister, and later to Manchester, England.

Growing up as a Mancunian, M.G. based her formative years arond the television series Doctor Who and Blake’s 7 and the fortunes of Manchester United.

As a teenager, during regular visits to her father in Mexico, M.G. became fascinated by Mayan archaeology. She made several trips to Mayan ruins in Yucatan and Chiapas and one such trip gave her the seed of the idea of what would later become The Joshua Files: Invisible City.

As a student, M.G. was interested in molecular biology and studied biochemistry at St Cross College, Oxford. M.G. spent several years working in research laboratories before setting up her own internet company.

Whilst visiting family in Switzerland in 2004, a skiing accident left M.G. with a shattered tibia plateau. Forced to spend many weeks recuperating from surgery, she decided to keep a promise she’d made to herself to one day pursue a career as a novelist. Writing on a laptop next to her bed, M.G. began work on a techno thriller which combined her two intellectual loves – archaeology and biology. From this initial manuscript came the idea for a story featuring a young boy searching for a lost Mayan codex… and The Joshua Files were born.

In an attempt to cover up the fact that she’s a bit of a geek, M.G. spends as much time as possible going out to salsa clubs to dance. She adores anything written by her quartet of literary gurus: Haruki Murakami, Gabriel Garcia Marquez, Jorge Luis Borges and Italo Calvino.

M.G. lives in Oxford with her husband and their two daughters. She was the fastest-selling UK debut children’s author of 2008.