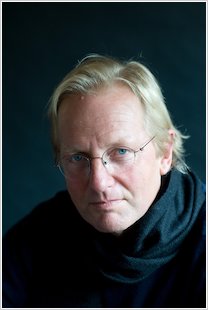 Sam Llewellyn lives with his wife, Karen Wallace, herself an award-winning writer of children’s books, in a medieval farmhouse on the edge of the Welsh mountains. His son Will is married to Katy Moran, another children’s author, and his other son Martin is a scientist who studies diseases, often in the remote rainforests of the Upper Amazon.

Sam spends a lot of time looking after ten acres of jungle garden and a large collection of boats. He loves to write, and is the author of about a dozen thrillers, most of them set on or by the sea, and two historical novels about the Isles of Scilly. Five years ago he felt that he had killed off too many people in his books, and wanted to write something purely insane. The result was Little Darlings,a series of books for children counterblasting twee Peter Pan.

To take a break from writing he often walks up Hergest Ridge, home of a ghost by the name of Black Vaughan, and to research his books he has fun doing things like sitting in dusty libraries, travelling by freighter to distant atolls in the far Pacific, discussing pirates and sailing the seas.

His latest series The Monsters of Lyonnesse began in 2009 with The Well Between the Worlds.